Twenty-Seven
Twenty-Seven clanged its hanger against a bouncing Twenty-Eight.
“You?” I asked Twenty-Seven, picking it up.
The vivid pink dress, sparkling with crystals and gold embroidery, rippled around my forearm in a wave of flounces. (Page 101)

Before I began writing the 100 Dresses series, I did a lot of research on historical figures who owned large wardrobes. For example, Queen Elizabeth I of England was known for her costly gowns, many of which were gifts from courtiers seeking favor with Her Majesty. One of the pitfalls of such research is that one must rely on paintings and written descriptions. Descriptions can be confusing, and paintings…well, artists are more interested in displaying the magnificence of the monarch than recreating every detail of their costume.

And then I discovered that some museums have photos of their collections online! Catherine the Great of Russia wore some of the most lavish dresses, and many have been preserved and photographed. Her coronation dress was the inspiration for Twenty-Seven. The original dress is red, has short sleeves, features a long train, and is loaded with gold embroidery—of course it is; an empress wore it! Mine is pink with a touch of gold embroidery, lace, and shimmering crystals. Catherine lived from 1729–1796; with the long pointed sleeves, my dress is a bit more medieval. It’s also a shade of shocking pink unheard of in the Middle Ages. But I like to think that Catherine would have worn it. 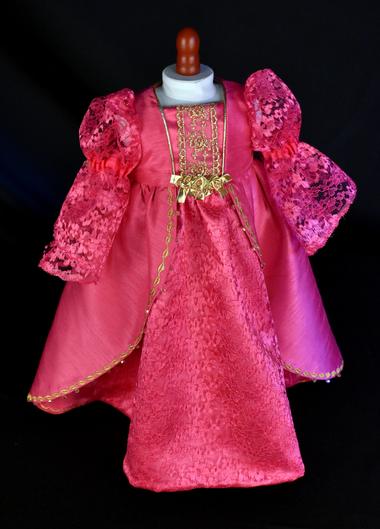 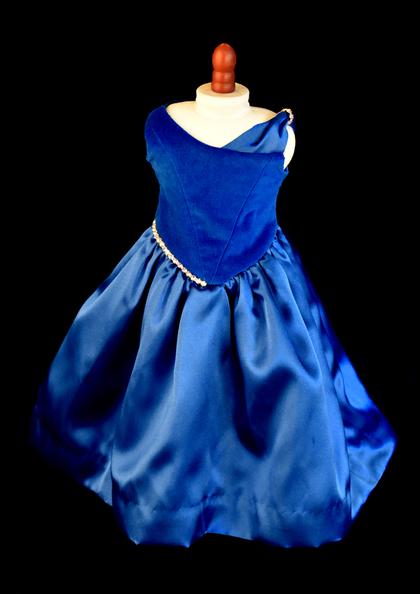 I slid into the new dress, settling it over my petticoat. It was a shade darker than the silver-gray fall dress I’d been wearing, and different in style. The fall dresses were cut from a heavier cotton than the summer dresses and had three-quarter-length sleeves. This dress had a stand-up collar and long sleeves with an edging of lace at the wrist. I’d never owned anything with lace on it before. I admired myself in the mirror as I tied on my crisp white apron with the silver butterfly embroidered on the pocket. (Pages 51–52)

I grew up in the Sixties, an era of funky, bright clothes. The Sixties weren’t big on lace or ruffles or frilly anything. I wore a ton of zip-up-the-front A-line dresses in lime green (so not my color), brown (yawn), neon pink (eye searing), paisley (ok, I sort of liked paisley), and the (never-ending) loud plaid. What serious princess would be caught dead dressed like that? To be fair, a number of real, life princesses did wear those clothes and probably really liked them. But my fictional heroines wouldn’t have! Can you picture Anne of Green Gables in lime green? Or Arrietty Clock in lemon plaid? Or Cinderella waltzing in paisley? It’s better not to think about it. The one good thing I can say about the Sixties is that the color purple was popular. (The girl next to me in band class had purple suede shoes…I still want a pair.)

So, back to my point. Darling’s never owned nice clothes before. But in Ghost of a Chance, she gets a taste of finery. Lace trim. That fancy wool coat. New mittens. She’s on a fashion safari! And in The Starlight Slippers, more exciting Princess’s Girls clothes await our intrepid heroine!

Darling’s dress and apron were created using Simplicity 1179 by Keepers Dolly Duds, with the apron collar removed and a pocket added. 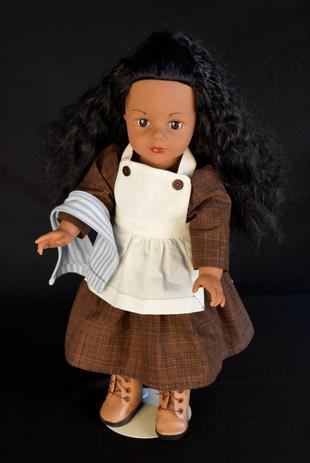 Forty-Nine
Forty-Nine shone like burnished metal, dripping jet-black stones and sporting black lace trim. It consisted of a fitted dress with a short fitted jacket worn over it, quite unlike the other dresses. It had a serious air about it, seeming to blink owlishly at me. The perfect dress to wear to a library. (Page 62)

My grandmother Edna was partial to nicknames and used to call me Susan B. Anthony. I had no idea who she meant. Later, I discovered that Susan B. Anthony was a key figure in the struggle for women’s right to vote. Grandmother was born in 1900 and had an astonishing memory for dates, times, and people. She even wrote family biographies for relatives. She remembered Susan B. Anthony as reportedly being a very determined person. (I guess she thought I was a little stubborn…hence the nickname.)

My mom always portrayed herself as an especially well-behaved child. Grandmother, as I eventually found out, called my mother Wild Bill (after Wild Bill Hickok) because she was prone to ripping her clothes and scraping her knees. This came as a surprise. I’ve since realized that everyone got into some trouble when they were a kid. Nobody’s perfect. Even Grandmother admitted that, as the oldest grandchild in her family, she herself was spoiled rotten by her aunts.

Ghost of a Chance

Ask and the world answers!

I love to sew, but my projects were always been limited by the patterns, fabrics, and trim I could find locally. Then I discovered the online world of doll clothes makers and designers. I have connected with warm, wonderful, creative people from all over the United States, as well as Canada, England, Sweden, France, and South Africa. I've learned so much, discovered so many new resources, and been so challenged to excel. Please take time to note the designers whose patterns I credit and visit their websites. There are so many fabulous designs out there! I wish I could I include them all. (But there are only 100 dresses!)

Gillian is modeling the uniform of the Under-scrubbers and Under-dyers. It’s what both she and Darling wore in If the Magic Fits. It’s rather drab. And practical. After all, if you’re going to spend your time washing and drying dirty pots, you want something that won’t show stains. But none of the under-servants are especially crazy about it. I wouldn’t be either. Be patient. Gillian is in for more exciting times (and clothes) in The Starlight Slippers.

Both girls’ boots are the custom work of Julie Helmer. You can see her shop at SewDolledUp81 on Etsy.

Forty-nine is crafted from the 1896 Susan B. Anthony pattern by Flossie Potter Patterns (available at PixieFaire.com). I used a very slinky bronze evening fabric, which I reinforced with very stiff interfacing. The jacket is so stiff that, as you can see in the picture, it can stand by itself. Jet beads were very popular at the turn of the last century. Queen Victoria worn jewelry set with jet as a tribute to her late husband, Albert. Elaborate black mourning clothes were also very popular at the time. The real Susan B. Anthony wore lots of black, although I’m not sure why when there were so many other lovely colors.

Forty-nine is an example of a dress that’s really a collection of pieces: a jacket, skirt, and shirtwaist (we’d call it a blouse nowadays). Shirtwaists often had very full sleeves and lots of lace, pin tucks, and embroidery. I have many old photos of Grandmother’s family dressed up in fabulous shirtwaists and very snazzy hats.

Thirty-Six
The diamonds on Thirty-Six’s shoulder twinkled at me. I picked up the royal-blue silk dress with its dark blue velvet bodice and pinched waist. An elaborate gown, just the sort I imaged the Princess wearing to a ball. (Page 187)

Thirty-six is my very favorite gown. Velvet, satin, diamonds! It’s also the most contemporary gown in the closet—you can picture it on the runway or red carpet right now. Deceptively simple, it’s very tricky and time-consuming to create. This dress is underlined (that’s a layer of fabric under the fabric for support), lined, and has a tulle underskirt and an invisible zipper. The fit is tight. And the crystal trim cost more than the fabric! It’s the dress I keep with me in my sewing room—just so I can admire it as I work on other projects. Thirty-Six is also the first dress I ever imagined when I started writing Darling’s story. It’s what I would wear to the ball if I were a princess.

Fifty
Fifty was a marvel of silver lace. I pounced on it before Lyric could object. But once again, the mirror revealed a Laundress. (Page 187)

This style of dress is sometimes called a Watteau gown because the artist Jean-Antoine Watteau painted a lot of ladies wearing it. This style was popular in the late 1600s and early 1700s. I first discovered these dresses when I was at the Louvre years ago and really, I’ve always wanted one, although I don’t suppose I’d find wearing one very practical. Basically, it is loose robe (sort of like a silk bathrobe) with tucks in the back so that the top is very fitted, but long and flowing on the bottom. That flowing robe made a very pretty picture as a lady moved.

Underneath your Watteau gown, you’d wear a chemise, a petticoat, a skirt, and a stomacher—that’s the fancy piece you see in the middle of the bodice. Stomachers were attached with sharp, straight pins. Think about that: somebody pinned your clothes on in the morning! You’d think twice about how you moved. These gowns were popular because you could change the look of them by wearing a different skirt or stomacher. Some historic gowns have plain stomachers for day and fancy ones for evening, proof that women have always been clever when it comes to expanding their wardrobes.

(Created using Thimbles & Acorns: Saque Back Gown and Pet en l’ier Jacket pattern by Shari Fuller. You can find her patterns on PixieFaire.com or her website: Thimblesandacorns.com. Shari includes wonderful historical information and insights in all her patterns.)