Seventy-Seven
Seventy-Seven wiggled a silver ribbon at me. I picked up the lilac satin with its silvery white underskirt and held it out.
“We have a volunteer,” I told Roger. (Page 77, which is a coincidence, I assure you.)

Seventy-Seven is what we think of as a typical princess dress, although no real princess ever wore such a dress. Purple and blue dyes existed in ancient times. Both were very expensive; purple so much so that it was usually only worn by royalty. Occasionally, monarchs even issued laws to that effect. The first synthetic purple or mauve dye was discovered by William Henry Perkin in 1856. Any princess in the Middle Ages or Renaissance period who spent the money on purple dye, wanted a good solid purple. Water it down to lavender? Goodness, no. People might think she couldn’t afford the real thing. (In some cases that was true and some monarchs were notorious for buying more expensive clothing than they could afford.)

Also, medieval people wore padded trim on their clothes with fabric cords or strings of pearls wound over them, but slashed sleeves, and the pearl-and-gem combination at the waist, were worn much later. Not to mention that amethysts were not generally worn at the time either. A princess worth her salt wore rubies, emeralds, diamonds, pearls, or sapphires. Generally speaking, the more it cost and the harder it was to come by, the more apt kings and queen were to wear it. But never mind that! I love lavender and purples and gems and satin and well, this dress! This is where whimsy meets fashion.

Forty-One
A black sleeve poked timidly out from behind a sapphire taffeta. I walked over to the sleeve. Number Forty-One: velvet black as ebony with a high collar encrusted with pearls. Gold swirls, leaves, and flourishes intertwined with more pearls traced the dress’s sleeves, bodice, and hem. (Page 152)

Forty-One is my personal favorite. I love stories about Tudor England, and I especially love the clothes. As a teen-ager I bore a striking resemblance to Hans Holbein’s portrait of Anne of Cleves and used to picture myself flouncing about in velvet covered with real pearls and jewels. I even painted a self-portrait wearing Anne’s red velvet gown. I thought it was a stunning piece of art at the time—now it’s hidden in a dark corner of the basement—so no, you can’t see it. Ever.

This dress took the longest to sew of the first three; all the gold cord and glass pearls (alas, not real ones) are sewn on by hand, using a sewing gauge to measure the precise placement of each.

A particular inspiration for Forty-one was the wedding portrait of Mary Tudor, Dowager Queen of France, and her husband, Charles Brandon, Duke of Suffolk, 1515. (Not to be confused with Mary Tudor, Henry VIII’s daughter who became the Queen of England. Mary was Henry’s little sister whom he married off to Louis XII, the aging King of France, who already been widowed twice. Louis soon died and Mary quickly married Charles Brandon—with whom she had long been in love—in secret before her brother could find another elderly king for her to wed. When Henry found out, he was very was angry. But that’s another story…) If you look up the wedding portrait you’ll notice that there is no collar; high collars were not popular until some years later. 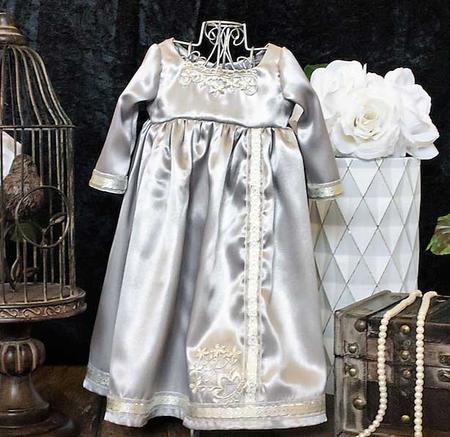 The Dress in History
Pick up any book on fashion in history and you might get the idea that what is pictured is what everyone wore. But a good fashion historian will tell you that there is no such thing as the dress worn in any era. Look around you—at school, the mall, church—no two people are wearing exactly the same thing. That’s always been true.

Styles change over time. Usually gradually. Here a bit, there a bit. It wasn’t uncommon for women to take elements of a new style and add it to their old dresses. Because few people could afford to replace their existing wardrobe with a whole new one every time styles changed. If pink ribbons were all the rage, then you might take that old blue dress and make it more fashionable by sewing on new pink ribbons.

So if you could walk around, say, 1852, you might see ladies wearing clothing that reflected fashions over the previous twenty years, with a piece of this mixed with a bit of that. Only a handful would be wearing the very latest thing, “all-nice-and-new-like” as the Lindy the Head Presser would say.

Also the idea that the dress was a one-piece garment is a fairly new invention. Once upon a time, dresses came in pieces: sleeves, bodices, skirts, and underskirts. You might own two sets of sleeves, three bodices, one skirt, and two underskirts (that would have been a lot in Renaissance times, and you would probably have been wealthy) and change the combination every day. That way your friends might think you had more clothes than you did. (Although, anyone paying attention would know better.) During the 18th century stomachers were popular. A stomacher was a fancy piece worn over your underclothes on your chest and stache. You would wear a robe (a dress with no front) over your underskirt and stomach. Just by changing the under skirt or the stomacher, you could change your whole look. And it was cheaper to have two or three fancy stomachers than to have two or three robes.

So fashion has always been a mix-and-match adventure—just like it is today. 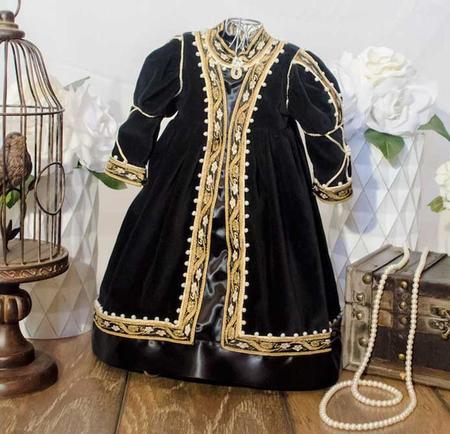 Above photos by Kelsay Johnson.

The Princess’s Girls Uniform
Francesca folded her arms. Clearly, she was not about to give me any privacy. So I turned around, pulled off my apron and dress, and stepped into the new dress. The fabric slipped on like butter over toast and smelled like lilacs. The pinafore had wide sashes that tied behind my back. I fumbled with them for a moment until Francesca whisked them out of my hands and whipped them into a bow. (Page 29)

The uniform is my tribute to children’s fashion. When I was two or three, my father bought me a Kate Greenaway dress, a popular label at the time. It was the softest, glossiest pale-green cotton. It felt wonderful to wear. Twirled like a dream, had long trailing ribbons to tie around the embroidered bouquet of flowers on the front, and hidden pockets in the side seams. Fittingly, Kate Greenaway dresses were named after the children’s book illustrator of the same name. Kate Greenaway drew children’s clothing that influenced the way real children were dressed. Ruffles, lace, pinafores—all were wildly popular in the late 1800’s through the early 1900’s. The puffed sleeves are a tribute to Anne of Green Gables, who always wanted them.

Eleven was a challenge. Not because it was difficult to make, but for two reasons. First, silver-gilt thread isn’t readily available. Not only that, but no one knows what it is when they read about it. It sounds like silver, but may appear goldish, because it’s a thread core wrapped in gold-covered silver filaments. (Which clears it right up! No? I agree; it helps if you’ve seen a picture.)  Second, I had to follow the description in the book—where Darling doesn’t think Eleven is all that pretty—and also create something visually appealing. In the end, I kept my silver-gray dress simple and added ribbons and flowers trimmed from lace that have both silver-and-gold-colored threads.
An important detail about dresses like Eleven is this: as Darling discovered in the story, some dresses look better on you then they do on the hanger.

A word to parents: I do not sell doll clothes or make them to order. This page is strictly for fun. I include sewing notes to inspire those of you who’d like to make your own versions. Please note that patterns listed above maybe out of print or otherwise unavailable and that, depending on the dress, I may have made significant alterations in cut or styling.

I have three favorite things: stories, dresses, and sewing, so I am always looking for ways to combine them. And here I have it! Candace’s Closet will feature dresses from each book, created in an 18-inch version. These dresses combine styles, designs, and sewing techniques from the last thousand years of ladies’ fashion—not to mention whimsy and a dash of fantasy. So while, a dress may have elements of fifteenth-century style, it may be sewn in a fabric not common until the eighteenth. You just never know. The 100 dresses aren’t your ordinary dresses. Neither will these be!

Come back at the release of each new book to see more dresses!

Eleven
With so many very beautiful dresses, Eleven wasn’t my first choice. It wasn’t ugly . . . exactly. It was sewn of tissue-thin silver cloth, edged with silver-gilt ribbons, and embroidered with silver-gilt flowers around the neckline. It was elegant but simple. (Page 62)

Eleven was inspired by a dress from the Costume Institute of the Metropolitan Museum of Art. The gown, a striped gray wool from Mantua, Italy, was made in about 1695 and embroidered all over in designs of silver gilt thread. (You can see a picture of this dress in 100 Dresses, Metropolitan Museum of Art, Yale Press 2010.) The dress itself isn’t that exciting, but the silver-gilt embroidery fascinated me. Imagine having a rather dull-colored dress covered with threads made from real gold and silver!

I expected Eighteen to be the easiest dress to make. I was wrong. I imagined a delightful frothy confection like ladies wore on a stroll in the 1860s. Except that the day dresses worn then were usually sewn from wool or cotton or a nice solid silk. But this is fantasy, so I kept the silhouette of the 1860’s and allowed myself to take liberties with the fabric. But. A mostly-cream-colored dress is…dull in photos. I had to find a very glossy fabric with lots of surface sheen. You don’t see that in often in cream. I settled on a polyester shantung, which is wonderfully shiny, but stiff as a board. Another thing: the diamond buttons and lace peplum are more in keeping with the 1700’s, but I used them anyway. 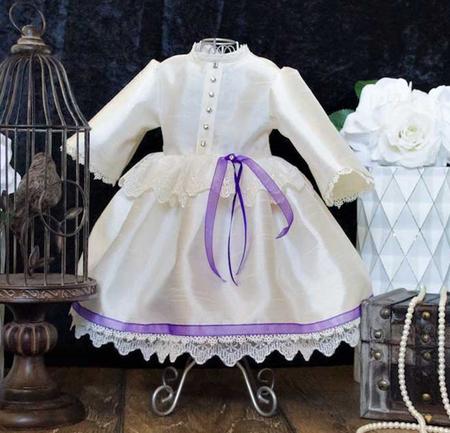 Sewing Notes:
Dress and slip: Simplicity 1486 by Cupcake Cutie Pie. Apron (pocket my addition): Simplicity 1391 by Keepers Dolly Duds. The boots are the custom work of Julie Helmer; you can see more of her creations at her Etsy shop, SewDolledUp81. 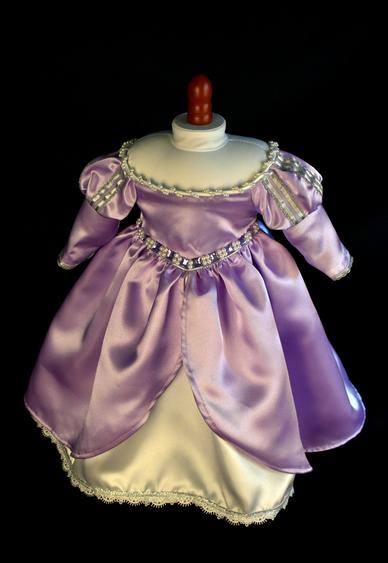 ​​​If The Magic Fits 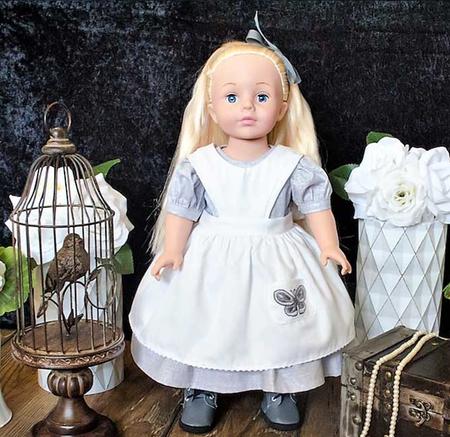